This chapter introduces the overview of SELinux, including its security design, model and facilities to help administration.

The shortest answer to the question of "what is the SELinux?" is that it is an implementation of reference monitor within the Linux kernel. The reference monitor is a small software module to control all the accesses to data objects and devices based on its security policy, which have to be 1) tamperproof, 2) always-invoked and 3) small enough to be verifiable. 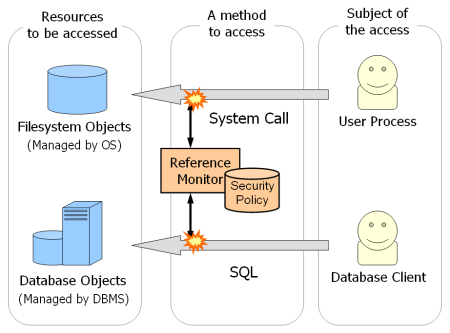 We can port this mode to accesses on database objects. In this case, all the data objects are accessed via SQL, instead of system calls. When we try to run SQL queries, SE-PostgreSQL always acquires them to check the privileges of client, and makes its decision based on the security policy of SELinux. It is fully independent from any existing database acl mechanism.

XACE/SELinux is another example to utilize in-kernel reference monitor from userspace applications. In this case, resources are X-window objects, and X-protocol is a method to access.

See the The privileges of clients. It says SE-PostgreSQL applies the security context of peer process as privileges of client, independently from the database authentication. A same security policy always returns same result for the same combination between two security contexts, so it also means we can apply consistent rules in access controls. In addition, all decisions in access controls are centralized manageable due to the single unified security policy, and non-bypassable even if clients are database superusers due to its characteristics of always-invoked.

The following a few sections describes the details of rules to make a decision.

This subsection introduces the details of security context again.

See the Management of security context to understand implementation in SE-PostgreSQL.

A security context is an attribute represented in text format, and contains all the information to make a decision in access controls by SELinux. It has four fields separated by colon character, these are "SELinux user", "role", "type" and "range".

SELinux makes its access control decision based on a few different security models, and they adopt individually different field to make its decision. It need all the security models to allow the required accesses to get a positive result.

The first field is "SELinux user" which corresponds to user identifier of the operating system. user_u is a substitute when a proper SELinux user does not defined in the security policy. The second field is "Role" which is used in RBAC. This field is available at only processes, so object_r is uniformly set to any resources. The third field is "Type" or "Domain". We call is as "Domain" when the security context is assigned to process. The type or domain is used as an identifier of type enforcement which is most significant security model in the SELinux. The fourth field is "Range" which is used in MLS (Multi Level Security) or MCS (Multi Category Security) mechanism. This field can be translated into human readable format by mcstrans service. For example, it enables to display s0:c0.c1023 as SystemHigh.

We introduce these security models below.

TE (Type Enforcement) is the most significant security model in SELinux. It adopts the third field of security context as its identifier, and we describe the relationship between two types. We can call a type assigned to processes as a domain, but here is no fundamental difference other than its name. 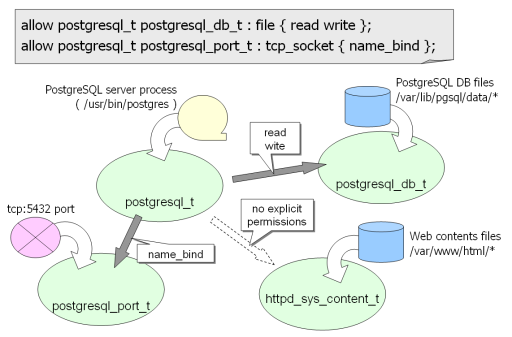 It is important to understand how to assign a security context of processes, not executable program files. A process inherits the domain of its parent process in the normal cases. However, the /sbin/init is the common ancestor of all the processes. If SELinux had no feature to switch domain of processes, all processes would work same domain. But it is incorrect.

SELinux has a mechanism to switch domain of processes, called as "domain transition".

In the default security policy, the initrc_t is a domain for init scripts, and the postgresql_exec_t is a type for /usr/bin/postgres executable file. If there was no TYPE_TRANSITION, PostgreSQL server processes kicked by init script would inherit initrc_t, however, the TYPE_TRANSITION rule enables to change the domain of the process, then it works within postgresql_t domain as we expected.

The /sbin/init works on the init_t domain, so rest of child processes are assigned their proper domain via chains of domain transition.

We can apply this scheme for resources except for processes. The following example uses file as the object class, it means the security context of newly created file under the directory labeled as var_log_t is postgresql_log_t

This idea is also applied in SE-PostgreSQL, to specify the security context of newly created database objects.

SELinux implements its RBAC (Role Based Access Control) feature as a boundary of domain transitions. The role is a set of domains, and it is identified by the second field of security context. Please note that it is not a set of types. This idea is applied to processes only.

When a process tries to switch its working domain, both of older and newer domain have to be contained the current role. Please note that domain transition replaces the third field in security context of process, but it does not affect the role because it is a different concept independently configured.

If a role of baz_r dominates dom_X_t in addition to them, and he is assigned the baz_r role at the login time, the above domain transition will be allowed.

We can use this feature to actualize limited privileged users. For example, we will be able to see a root user with a role of database administration can manage database configuration, start/stop sever process and so on, but he does not touch configurations related to mail server, web server and so on.

However, we have to wait for more improvement in the default security policy to see the vision. So, we don't use the RBAC feature aggressively in the default policy of SE-PostgreSQL,

The MLS (Multi Level Security) is a design of traditional mandatory access controls based on the Bell-La-Padulla model. It uses the fourth field in the security context called as range. The MCS (Multi Categories Security) is a simplified design of MLS model.

The access control rules in MLS are described as a relationship between lower- or higher-range of process and range of resources. Which range is checked depends on the domain of the process working on. Some of special domains are configured to apply higher-range in checks of MLS rules, but most of domains apply lower-range there.

When the process tries to write files, SELinux does not allow it except for a file labeled as s2:c1.c2 which is same as lower-range of process. 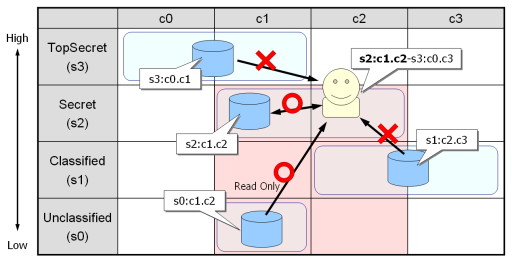 In summary, the following rules are requirements by MLS policy

The MCS model is a simplified implementation of MLS. It makes all the processes and resources to share a unique sensitivity level, so all sensitivities have equal-relationship, thus, it decides accessibility based on inclusion relationship only.

In the default security policy, MCS rules are activated, and MLS is an option.

SELinux has two working modes: enforcing and permissive mode. In the both working modes, SELinux checks its security policy to decide whether the given action should be allowed, or not. However, SELinux does not prevent anything in the permissive mode, but it also generates audit log records to report violated accesses. It can be used to list up what permissions are required by the running applications.

We can put the system default behavior on /etc/selinux/config, and the setenforce command enables us to switch the working mode dynamically.

SE-PostgreSQL follows the working mode of in-kernel SELinux in the default. But, we can set up its own working mode by the guc variable of sepostgresql.

For example, SELinux does not allow Samba file server to access user's home directories in the default. However, conditional policies to allow them depend on the boolean of samba_enable_home_dirs which has false in the default, as follows:

So, the Samba file server need to turn on the boolean to expose the user's home directories.

The security policy of SE-PostgreSQL also provides a few booleans to allow end-users to customize its security policy. See the Pre-defined object types and booleans for more details.

The system-config-selinux is a fine GUI utility to customize SELinux. It enables to set up the working mode of SELinux, the default security context of filesystem objects and network resources, the mapping between users and range on login time, human readable forms of ranges and policy modules. 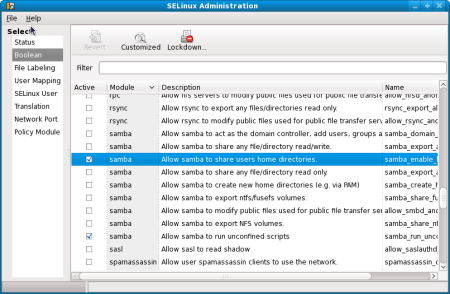