This chapter introduces architecture of the SE-PostgreSQL

How SE-PostgreSQL works with SELinux

SELinux performs as a reference monitor in the Linux kernel. From the definition, the reference monitor is a small enough and tamperproof module which checks all the accesses and makes its decision when user invokes a request to the data object managed by the system. At the operating system, user has to invoke system calls to access the data objects managed by the operating system, such as files, sockets and so on. SELinux acquires any system call invocations via the security hooks deployed on the strategic points, and makes its decision based on its security model and the security policy.

SELinux looks up an entry in the security policy which is a set of access control rules for the pair of security context, and prevents the required accesses if it is not explicitly allowed to the pair. This mechanism is similar to the client-server model, so it is often called security server which can return its decision for the given pair of the security contexts.

SELinux also exports the interface for userspaces, to perform as a security server. It provides a pseudo filesystem named as selinuxfs (mounted on /selinux in generally), providing some of raw interfaces to in-kernel SELinux. The libselinux provides a set of the abstraction level APIs for userspace applications. It enables userspace applications to confirm SELinux whether the security policy allows the required actions for the pair of security contexts, or not.

SE-PostgreSQL performs as a client of the security server. It checks any given queries come from clients, as if SELinux checks any system call invocations, and ask in-kernel SELinux whether it should be allowed, or not. Then, SE-PostgreSQL can prevent the client to access the required database object, if violated. Some of userspace applications perform as a client of the security server more than SE-PostgreSQL, such as XACE/SELinux (X.org with SELinux enhancement), nscd daemons, password utilities and so on.

This design gives us a characteristic feature called system-wide consistency in access controls, because all the access control decisions are made by the SELinux security server based on its common criteria. For example, it shall prevent a user without clearance to read an information labeled as `credential`, even if it is stored as either a file or a database record.

At the implementation level, SE-PostgreSQL puts various kind of hooks on the original PostgreSQL to acquire the controls and make its decision. These points have significant meanings, so we call it strategic points.

The following list is a part of the strategic points.

When SE-PostgreSQL is disabled at run-time or build-time, all the hooks don't affect anything. It fully performs as a normal PostgreSQL in other words.

All the SE-PostgreSQL logics are encapsulated behind the hooks, it enables to minimize the impact to the original PostgreSQL and gives well maintainability.

When SE-PostgreSQL communicates with in-kernel SELinux, it needs context-switching due to the system call invocation, however, it is basically a heavy operations, so it is necessary to reduce the number of system call invocations to minimize the performance loss due to the additional privileges checks. Especially, a query can fetch massive number of tuples in a single query, so it might be insufferable, if it has invoked a system call for each checks.

The idea of userspace avc (aceess vector cache) enables to minimize it. In the SELinux security model, massive number of objects tend to share a limited number of security context, and the same result shall be returned for the identical combination of the security context and actions, so we can cache recently asked pattern in the userspace. 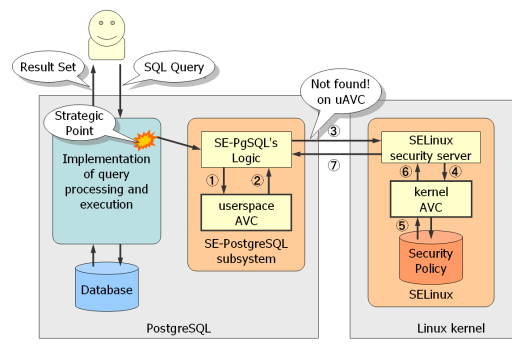 When a client gives a SQL query, SE-PostgreSQL subsystem is invoked to make its decision via a hook on a strategic points. At first, it checks userspace avc. If found, it can return the result immediately. If the given combination is not found, it needs to invoke in-kernel SELinux according to the communication protocol. The in-kernel SELinux also has a similar structure. It can lookup the kernel avc with little cost, but it is a heavy step to lookup an entry from the security policy (in comparison to the avc lookup).

The protocol requires to deliver the security context in text, so it is necessary to translate the security id when userspace avc mishits. However, its frequency is very small. More than 99% of checks hits the userspace avc generally.

Management of the security context

What is security context

Security context is a short formatted text which abstracts all the attributes of an entiry labeled in SELinux's access controls. On a system with SELinux enabled, any data objects managed by operating system are labeled with a certain security context.

For example, ls -Z shows the security context of files as follows. Major filesystems have a capability to associate individual files with an extended attribute (xattr), and SELinux utilize the feature to assign a certain security context on every files.

A security context consists of four field separated by a colon character.

Example of the security context:

The first field is selinux user, the second one is role, the third one is type, also called domain when the security context is assigned to processes, and the last field is range.

SELinux has a few security models (TE, MLS and RBAC), each security model picks up a certain field and makes its decision. The SELinux security server answers the given access should be allowed, only when all the security models allow it. Please see the SELinux Overview for more details. 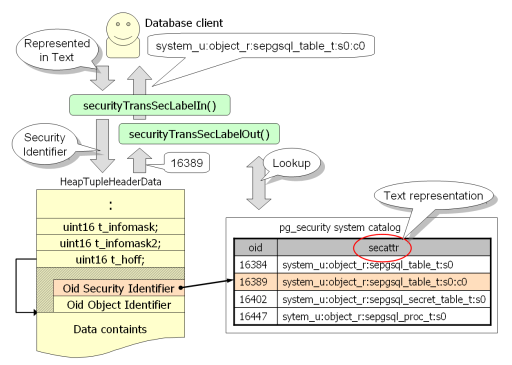 A new system column named security_label was added. System columns are implicitly created for every relations (except for oid), and not expanded with SELECT * FROM ... statement. These characteristics contributes the compatibility to existing queries embedded within application sotwares.

A characteristic of the new security_label system column is writable, although existing system columns are read-only. It allows users to change the security context of tuples using UPDATE statement as far as they have enough privileges.

The SELECT INTO and CREATE TABLE AS statement also supports the writable system column. When the fields list contains the security_label, its value is used for the explicitly specified security context.