This page is created to outline the features required to add the capability of Sharding in PostgreSQL CORE. The purpose of the page is to maintain a todo list for adding the sharding functionality in the core. The members collaborating on adding the capability in PG can use this page to see the current status of this feature and also see updates on the todo list.

Sharding in database is the ability to horizontally partition data across one more database shards. It is the mechanism to partition a table across one or more foreign servers. While the declarative partitioning feature allows users to partition tables into multiple partitioned tables living on the same database server, sharding allows tables to be partitioned in a way that the partitions live on external foreign servers and the parent table lives on the primary node where the user is creating the distributed table.   The built-in sharding feature in PostgreSQL will use a FDW-based approach. FDW’s are based on the SQL/MED specification that defines how an external data source can be accessed. PostgreSQL provides a number of foreign data wrappers (FDW’s) that are used for accessing external data sources. Using the FDW-based sharding, the data is partitioned to the shards in order to optimize the query for the sharded table. Various parts of the query e.g., aggregates, joins, are pushed down to the shards. This enables the heavy query processing to be done on the shards and only results of the query are sent back to the primary node.

Using the FDW architecture surely adds some overhead which can be avoided by other more sophisticated cross-node communication techniques. The trade-off with FDW sharding is that it is using a trusted architecture and it is simpler and relatively less time consuming to implements compared to other methods 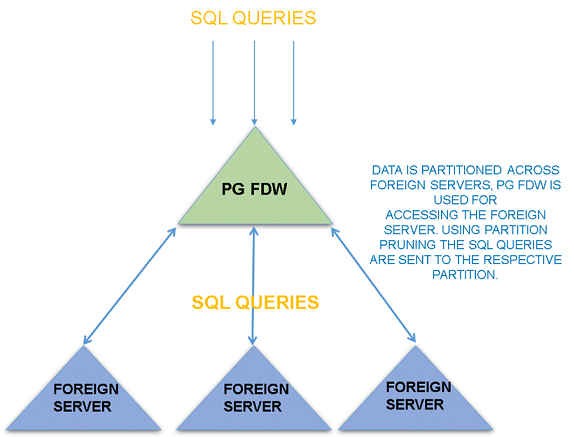 There are over a dozen forks of Postgres which implement sharding. While many of these forks have been successful, they often lag behind the community release of Postgres. By implementing sharding in community Postgres, this feature will be available to all users in current releases of Postgres. This should greatly increase the adoption of community Postgres in environments that need high write scaling or have very large databases.

One great challenge to implementing sharding in Postgres is achieving this goal with minimal code changes. Most of the sharding forks of Postgres require a volume of changes to the community code that would be unacceptable to the general Postgres community, many of whom don't need sharding. With the advent of Foreign Data Wrappers (FDW), it is now possible to consider a built-in sharding implementation which could be accomplished with an acceptable level of code changes.

The basic design of this possible FDW-based sharding solution is based on the work done by Postgres-XC, which was developed by NTT for almost ten years. Postgres-XL is a more flexible implementation of this design. Citus incorporates ideas from both projects and provides sharding without forking from Postgres.

The FDW machinery needs to be enhanced in order to support the sharding architecture. This will enable the bulk of query processing to be done on the foreign server side and only the filtered results will be sent back to the parent node. The push down capabilities will enable the shards (i.e. foreign servers) to do the heavy lifting, which greatly improves the performance of this feature. Push down in this context is the ability to push parts of the query to foreign servers in order to decrease the amount of data traveling from the foreign server to parent node. The two basic push-down techniques that have been part of postgres FDW from the start are select target-list pushdown and WHERE clause pushdown.

In the query above the planner will decide which partition to access based on the partition key i.e. logdate in this case. The WHERE clause will be pushed down to the foreign server that contains the respective partition. That’s the basic push down capabilities available in postgres_fdw.

The sharding feature requires more advanced push-down capabilities in order to push the maximum operations down to the foreign servers containing partitions and minimizing the data sent over the wire to the parent node. 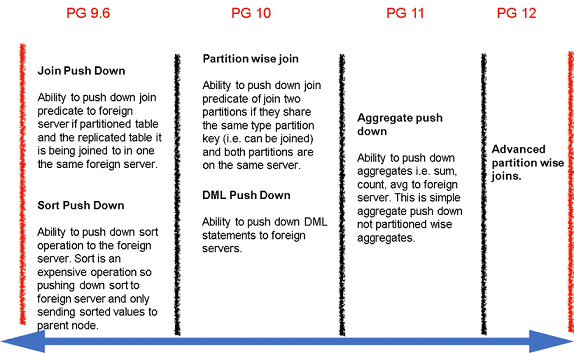 The above is the set of push down capabilities that have been added to PostgreSQL in last few major releases. The good thing about these features is that it already benefits a number of use cases even when the entire sharding feature is not in place.

It is important to note that these FDW enhancements are very useful for the performance of FDW queries even in the absence of the complete sharding feature.

Declarative table partitioning was added to PostgreSQL 10 by Amit Langote, it reuses the pre existing table inheritance infrastructure. The new features in PG 10 means that there is no longer need to create the constraints manually for child partitions or manually write the infrastructure for routing the queries to the correct partition. While PG 10 added the table partitioning feature, number of significant improvements for performance, partition pruning, partition management were added to PG 11.

The declarative partitioning would also be used for sharding.

Missing pieces for MVP of Sharding

The are still a number of important features remaining before we can say that we have a sharding feature in PostgreSQL. In this section we are going to discuss these features and the challenges with these features. I am sure there are other features related to database cluster management i.e., backup/failover, monitoring, that are not in this list.

The design proposal and patches for this feature has been sent on hackers for last several years but it is not getting enough community interest; hence the design of this feature is still outstanding.

This is a key piece needed for completing the sharding feature. We currently have aggregate pushdown that will send the aggregates down to the foreign server but we don’t have the functionality to run the aggregate operations on all the partitions in parallel.

This feature is particularly important for the OLAP use-case. The idea of having a large number of foreign servers containing partitions for a large partitioned table and aggregate operations running on all foreign servers in parallel is very powerful.

The infrastructure for the parallel foreign scan feature is asynchronous query execution; this is a major change in PostgreSQL.

This is another very important and difficult feature that is mandatory for sharding. The purpose of a global snapshot manager is to provide global transactional consistency.

This is a hard problem to solve and companies like Postgres Professional have tried to solve this problem by using an external transaction manager.

The partitions on foreign servers are currently not getting created automatically, as described in the “Sharding in PostgreSQL” section. Partitions need to be created manually on foreign servers. This can be a very tedious task if you are creating a partition table with large number of partitions and sub-partitions.

The shard management feature is suppose to provide the ability to auto-create the partitions and sub-partitions on the foreign servers. This will make the creation of sharded tables very easy.

Though not intending to go into design details of how this feature will be implemented, the basic idea is that a sharded table syntax will be built on top of a on declarative sharding syntax. The postgres_fdw will be used to pushdown the DDL to the foreign servers, while the FDW’s are only meant to do SELECT or DML. Doing DDL on external sources is not part of the SQL/MED specification.

This feature is not yet started in the community.

INSERT / UPDATE / DELETE / COPY operations for a partitioned table with foreign partitions must support multiple insert operations. This is necessary to accelerate bulk operations, as for a single or locally divided relations.

A number of companies have been investing time and resources into adding this capability to the Core of PostgreSQL; some of the names are mentioned below. The PG community members belonging to these companies are working to add this capability in the Core:

Below is list of active features for Sharding in the community and their updated statuses:

There are four possible use cases with increasing requirements:

Slides with diagrams of an early proposal are available. A meeting about clustering was held in 2015.