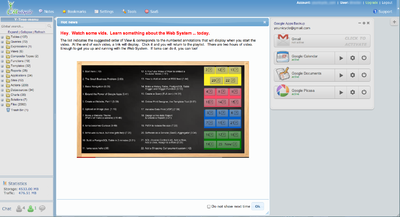 This is the current page for The Integrated Web System. Your Web Office..
Younicycle is an online Web System with 4 components; Cloud Management, Data Management, Content Management & Print and Documents Management. Younicycle uses PostgreSQL, Apache, Debian & Php as its foundation.

The idea was conceived in 2001 with the intent being to:

Announced the release of a branch of the Project, Spinbackup.com, a Cloud Backup for Google
a Cloud based backup service specific for Google users, which has been built on PostgreSql and Amazon Web Services (AWS), completed beta testing and is now available for the general public. In addition, Spinbackup has received certification from TrustE for Privacy and compliance with the US-EU Safe Harbor Privacy Principles.

Spinbackup requires that users be Google users and has implemented Google ID (OAuth2.0). As a result, Spinbackup does not require entry of a user's Google password.
Spinbackup was approved on 1/9/2013 and is now listed in Google Apps Marketplace.

Recoding of the Template Editor, the Web System's oldest tool. The Template Editor currently supports the design of Pdfs, to include reports and variable data printing, in addition to Pdf/X. Significant enhancements are underway, allowing it to be a professional level tool, along with the possibility to decouple from the Web System and stand alone for use with any csv file, along with local objects such as images. In addition, other features such as true leading and kerning will be implemented. Scheduled for release 1st quarter 2013.

A server package is available at no charge, but available only as a Debian install. Interested parties may inquire at the site.

Current version is named The Web System. The current version of PostgreSQL is 9.16, with plans to move to 9.2x in the 1st quarter of 2013.

Current features are extremely diverse and much easier to view than explain.Web System (2 hours) of Instructional Video
A 30 day, free test account is provided