The usual logical operators are available:

AND OR NOT SQL uses a three-valued Boolean logic where the null value represents "unknown". Observe the following truth tables:

The operators AND and OR are commutative, that is, you can switch the left and right operand without affecting the

result. But see Section 4.2.14 for more information about the order of evaluation of subexpressions. The usual comparison operators are available, shown in Table 9-1.

Note: The != operator is converted to <> in the parser stage. It is not possible to implement != and <>

operators that do different things.

return values of type boolean; expressions like 1 < 2 < 3 are not valid (because there is no < operator to compare

a Boolean value with 3).

In addition to the comparison operators, the special BETWEEN construct is available:

Notice that BETWEEN treats the endpoint values as included in the range. NOT BETWEEN does the opposite comparison:

less than or equal to the argument on the right. If it is not, those two arguments are automatically swapped, so

that a nonempty range is always implied.

To check whether a value is or is not null, use the constructs:

Do not write expression = NULL because NULL is not "equal to" NULL. (The null value represents an unknown value,

and it is not known whether two unknown values are equal.) This behavior conforms to the SQL standard.

Tip: Some applications might expect that expression = NULL returns true if expression evaluates to the null

value. It is highly recommended that these applications be modified to comply with the SQL standard. However, if

that cannot be done the transform_null_equals configuration variable is available. If it is enabled, PostgreSQL

will convert x = NULL clauses to x IS NULL.

Note: If the expression is row-valued, then IS NULL is true when the row expression itself is null or when

all the row's fields are null, while IS NOT NULL is true when the row expression itself is non-null and all the

row's fields are non-null. Because of this behavior, IS NULL and IS NOT NULL do not always return inverse results

false for both tests. This definition conforms to the SQL standard, and is a change from the inconsistent behavior

exhibited by PostgreSQL versions prior to 8.2.

Ordinary comparison operators yield null (signifying "unknown"), not true or false, when either input is null. For

example, 7 = NULL yields null. When this behavior is not suitable, use the IS [ NOT ] DISTINCT FROM constructs:

false, and if only one input is null it returns true. Similarly, IS NOT DISTINCT FROM is identical to = for non-

null inputs, but it returns true when both inputs are null, and false when only one input is null. Thus, these

constructs effectively act as though null were a normal data value, rather than "unknown".

Boolean values can also be tested using the constructs

These will always return true or false, never a null value, even when the operand is null. A null input is treated

as the logical value "unknown". Notice that IS UNKNOWN and IS NOT UNKNOWN are effectively the same as IS NULL and

IS NOT NULL, respectively, except that the input expression must be of Boolean type.

Mathematical operators are provided for many PostgreSQL types. For types without standard mathematical conventions 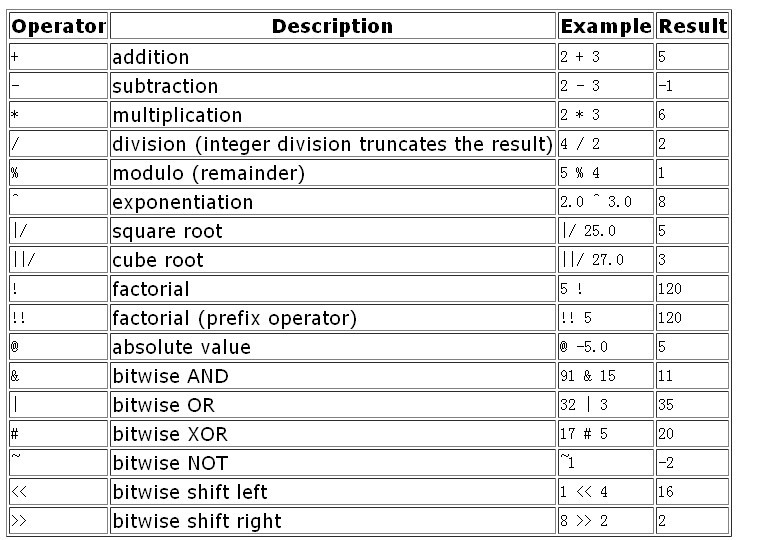 The bitwise operators work only on integral data types, whereas the others are available for all numeric data

types. The bitwise operators are also available for the bit string types bit and bit varying, as shown in Table 9-

Table 9-3 shows the available mathematical functions. In the table, dp indicates double precision. Many of these

functions are provided in multiple forms with different argument types. Except where noted, any given form of a

function returns the same data type as its argument. The functions working with double precision data are mostly

implemented on top of the host system's C library; accuracy and behavior in boundary cases can therefore vary

depending on the host system. Table 9-3. Mathematical Functions

This section describes functions and operators for examining and manipulating string values. Strings in this context include values of the types character, character varying, and text. Unless otherwise noted, all of the functions listed below work on all of these types, but be wary of potential effects of automatic space-padding when using the character type. Some functions also exist natively for the bit-string types.

SQL defines some string functions that use key words, rather than commas, to separate arguments. Details are in Table 9-5. PostgreSQL also provides versions of these functions that use the regular function invocation syntax (see Table 9-6).

Note: Before PostgreSQL 8.3, these functions would silently accept values of several non-string data types as well, due to the presence of implicit coercions from those data types to text. Those coercions have been removed because they frequently caused surprising behaviors. However, the string concatenation operator (||) still accepts non-string input, so long as at least one input is of a string type, as shown in Table 9-5. For other cases, insert an explicit coercion to text if you need to duplicate the previous behavior. Table 9-5. SQL String Functions and Operators 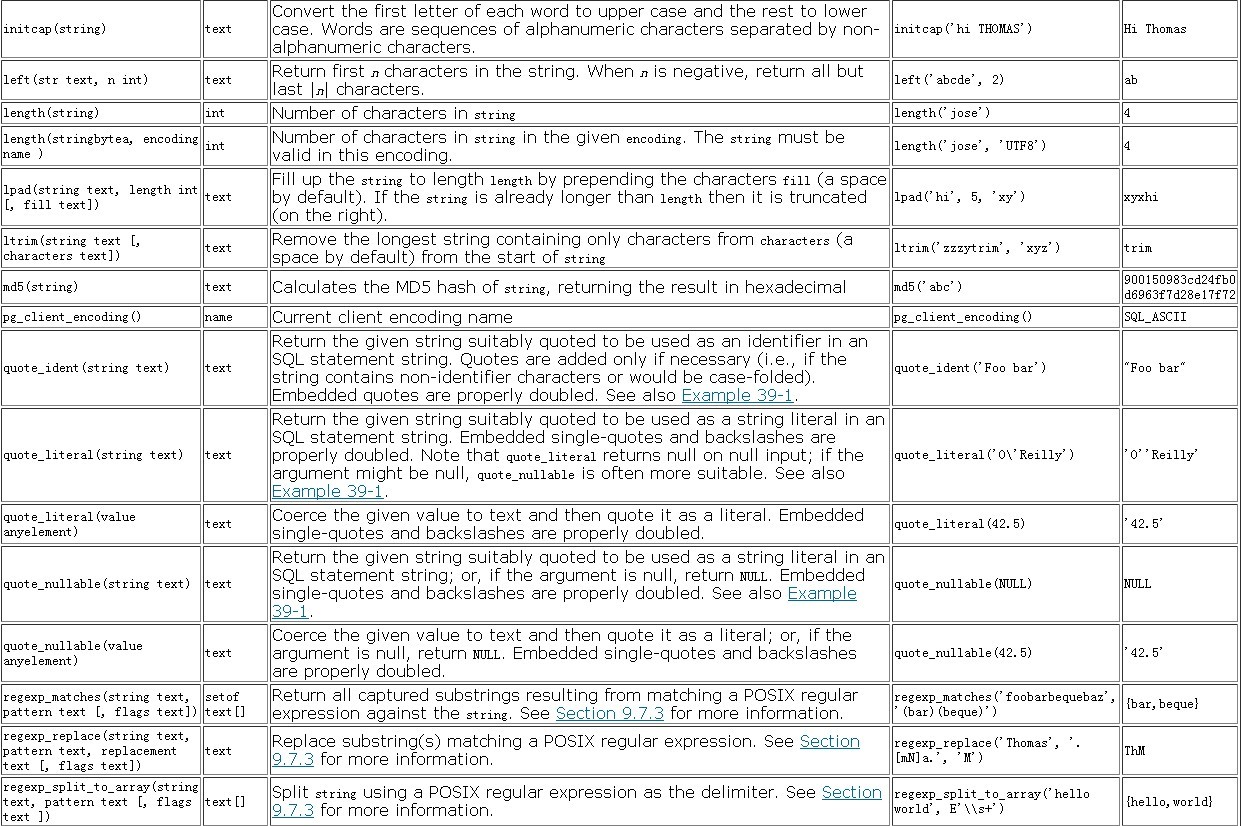 Notes: a. The conversion names follow a standard naming scheme: The official name of the source encoding with all non-alphanumeric characters replaced by underscores, followed by _to_, followed by the similarly processed destination encoding name. Therefore, the names might deviate from the customary encoding names.

This section describes functions and operators for examining and manipulating values of type bytea.

SQL defines some string functions that use key words, rather than commas, to separate arguments. Details are in Table 9-8. PostgreSQL also provides versions of these functions that use the regular function invocation syntax (see Table 9-9).